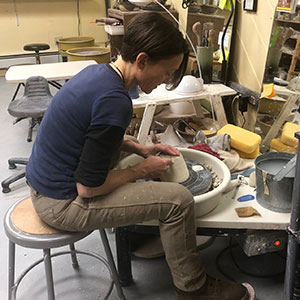 I never considered becoming a potter until later in life. I was exposed to pottery through my parents who took my sister and I to pottery shops and fairs and used pottery in our house.

While working on my BFA and a minor in art history, printmaking and painting were more interesting to me. I had an interest in pottery, but the professors emphasized modern sculptural pottery and I didn’t want to pursue that style. I continued to draw after my BFA until very recently and renewed an interest in photography.

While in graduate school I obtained a job, under an archeologist, producing technical drawings of ancient pottery from an excavation in Israel. The pottery was from the Early Bronze period to the Iron II period (approximately 3300–500 BCE). To translate the pottery to paper I had to measure the inside and outside curves and thicknesses of each piece with calipers and my eyes. Broken pieces were easy, but whole pieces had to be felt with my fingers alone. Little did I know that it was a great exercise for learning to feel my own pottery as I threw it on the wheel.

I decided to focus on pottery at this point in my life because I wanted to make art that can be touched and used. I have not given up my drawing and photography, but just added another medium in which to work. I find my background in other mediums, and the visual training, aid the decisions I make in designing my pottery. I learned how to throw from a combination of lessons from my step-father, Steve Landry, the owner and a potter at Studio 4 Potters, The Worcester Center for Crafts and a lot of self-study. For me, there are endless possibilities, ideas, and techniques in this medium.